ruminations on my canine familiar

A few weeks ago, I told you guys that Nala opened a bathroom door, carefully pulled a glass jar off of a counter, carried it to her bed, opened it, and licked out every. painstakingly. cut-up treat inside.

Step 1: Get a large ziplock bag, and turn the top of it inside out so that the bag will stand up on its own.

Step 2: Prepare hearts. If you have the time and inclination, you might spread them out in a single layer on parchment on a cookie sheet and freeze them for about half an hour so that they’re easier to cut up. Otherwise, I find kitchen shears a little less annoying than a knife and cutting board. Trim the excess fat off of each heart, then cut the remaining meat into about five or six pieces. I aim for the same size as the Primal nibs or a Fruitable treat–they only shrink a little, so shoot for about the size you want to see when they’re done. Toss each cut up heart directly into the prepared ziplock bag.

Step 3: Marinate. Mix together the honey, warm water, and pinch of salt in a bowl; use a whisk to make sure it really blends together. Pour into your baggie of cut-up hearts. Seal up bag, pressing all of the air out, and use your hands to squish things around and make sure that the liquid distributes evenly in there. Let sit in the fridge for around half an hour.

Step 4: Dehydrate. Drain the hearts in a colander with relatively small holes and dump them out onto paper towels. Pat them dry. Line your dehydrator trays with either parchment paper or, preferably, the dishwasher-safe mesh trays that it may have come with. Distribute the treats in an even layer, making sure not to crowd them too close together. Dehydrate them at 160º Fahrenheit until fully dry–they should be tough but not brittle, and it’s easiest to tell whether they’re done if you pull a treat out and let it cool off a bit. Our latest batch took about six hours.

Step 5: Store until use. I like glass jars, obviously, with lids that can be pulled off easily by creatures with thumbs and german shepherds. They seem to keep well at room temperature for a few days–but as they’ve usually all been eaten within a week, I can’t vouch for how to keep them longer. I’d guess in the freezer.

They’re basically a home-made version of the Primal jerky nibs, I admit. They have one main benefit over the commercial version–they are much, much cheaper (about a dollar per batch of one pound of raw meat, where one pound of meat yields three ounces of very light, non-smelly, non-greasy treats).

1 gram of treats from the batch that I made contains about eight calories, and is equal to five or six treats. Not bad, if you’re looking for a medium-value low calorie treat.

Finally, you can substitute any protein source that you want–any meat that you can cut into little pieces will turn out nicely, I’m sure. The fattier your cut, though, the greasier the treats will probably turn out.

I usually also dice a sweet potato into little cubes and toss those in the dehydrator, too. They make a good lower-value reset treat, and a nice chaser to eating a whole batch of chicken hearts off of a bathroom counter in a new place, I hear. 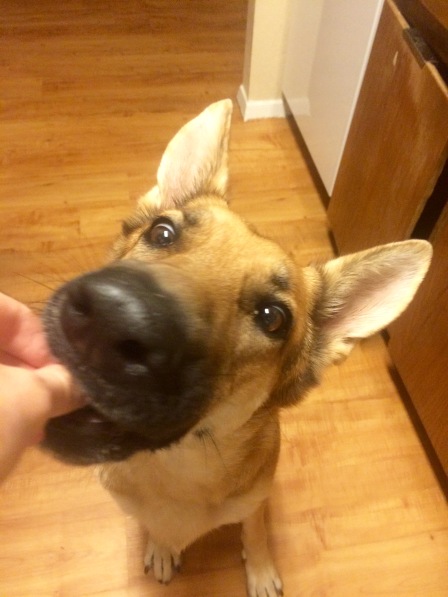 4 thoughts on “Those Dehydrator Treats”